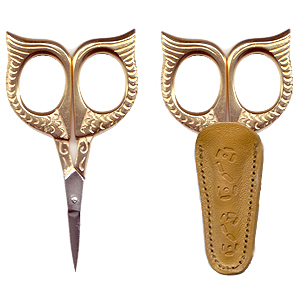 Michelle Erfurt wrote in with a question about her scissors. . .

I’m having an issue with a pair of my scissors and I’m hoping you can help. They are becoming difficult to open/close and are even starting to squeak a little. Otherwise they are cutting fine. What do I do?

It took me a while to answer this because I had to wait for my next trip to the Farmer’s Market, where I asked the guy who sharpens my knives. He doesn’t sharpen my scissors because I buy cheap scissors that aren’t worth sharpening. (My routine is to buy new scissors about once a year. My old scissors become my paper scissors, and my old paper scissors move to the kitchen, the garden, or the toolbox.)

He told me it sounded like you have something caught up in the joint between the two blades – maybe some thread or some gunk from cutting something with a residue on it? Are your scissors joined together with a screw? If yes, this will be an easy fix. Take them apart and give them a good cleaning. If there’s gunk, use some fine steel wool to help clean it out. Put them back together and adjust the screw so that you can hear the blades working against each other for the whole length. He said that action actually helps keep them sharp – the blades sharpen each other if everything is lined up right.

If you can’t take the blades apart, it’s going to be harder – but you need to do the same thing. Clean out anything that might be wedged in the joint. He suggested a steel brush to get in the crack, or running a fine wire around the joint like dental floss, trying to work out anything in there. He also thought you might need to spray it really heavily with WD40. Let the stuff sit for a while to dissolve any gunk, then work the blades and brush or floss out anything you can.

If you end up using WD40, don’t forget to really clean that oil off before cutting good fabric. He suggested cutting through something really absorbent (like flannel) several times to make sure every trace of the oil is gone.

Does anyone else have any suggestions for Michelle?